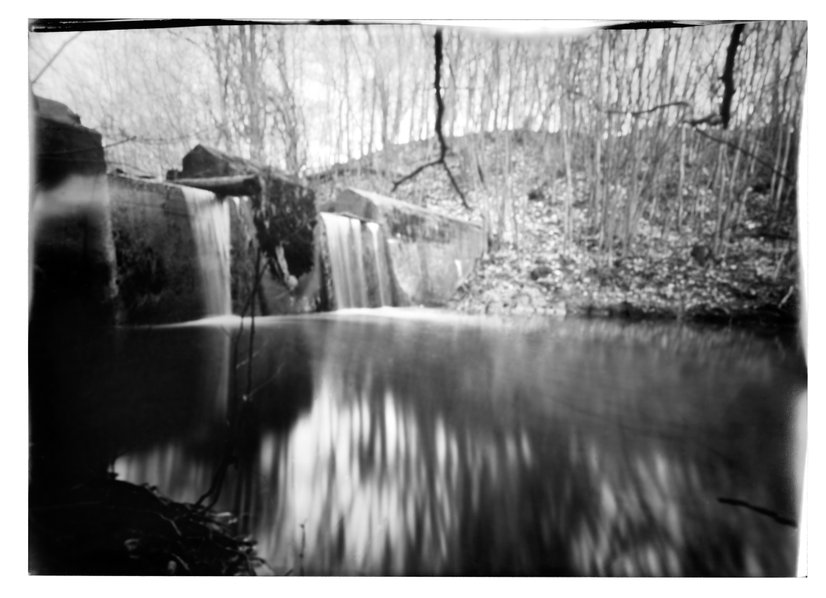 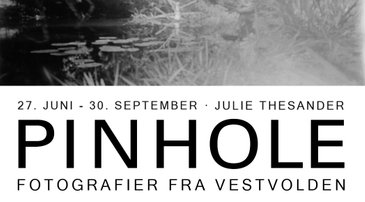 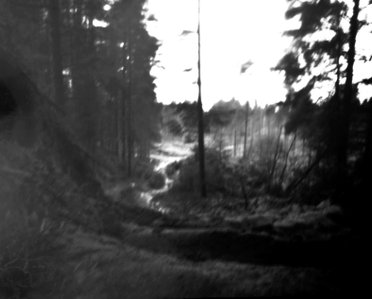 Alone in the wilderness

NOTES FROM MY HIKING TRIPS

The German guy is the only person I’ve talked to during the two days I’ve spent at the camp site. Suddenly I’m aware, that I haven’t really payed attention to the fact that I’m a lone traveller. Of course I know that I’m traveling alone. But it isn’t until I’m spending time with this many people without talking to any of them that I’m beginning to feel a bit lonely.

In nature I’m all by myself but that’s a given and I don’t miss the company of other hikers. I kind of slip into my surroundings occupied only by my thoughts and the walking. Sometimes I’ll sing a song or even speak to myself. That happens sooner than you’d think. But in the midst of company, which I’m clearly not part of, it’s noticeable. Lonely amongst people and alone in nature. There’s a huge difference.

It's not because I don't like the company of other people. I just find that on my hiking trips, I prefer to walk by myself and then meet people when I arrive somewhere later in the day.

Sometimes I spend the night in the middle of the forest all by myself (often non intentionally). People I meet are both impressed and astonished by the way I choose to travel. Don’t I miss company? Am I not afraid in the woods alone at night? To that last question I will have to answer yes. But feeeling lonely doesn’t really happen until I’m with other people. Never while walking through the apparently empty landscapes. Birds are singing and a brook purls. The raspberries are ripe. On a summer's day nature is very welcoming and even generous. In fact, it’s everything but emptiness and isolation I feel. 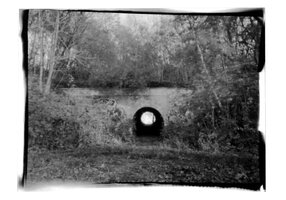 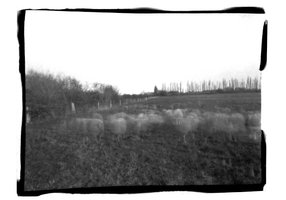 Allegedly, George Davisons picture 'The Onion Field', that won the highest price at the annual exhibition of the Photographic Society in London in 1890, quickstarted the popularity of the pinhole camera. American, European and Japanese companies all put pinhole cameras on the market and for a while pinhole photography was the latest craze. However the use of camera lenses and a growing need for speed and mass production soon made people forget all about pinhole photography. It wasn't until the 1960s a few artists began to rediscover the technique.

During the latest decades several alternative photographic processes have had a renaissance.

With the more uniform and predictable expression digital photography offers, a need for exploring the elementary photographic principles as well as discovering the world in more unique ways has emerged. However, playing around and mixing analogue and digital techniques seems to have a great appeal for many photographers.

I find much joy in exploring this universe of total depth of field and indeterminable exposure. The experience of staying with each motif for a length of time, getting to know the scene, considering the change of light and every detail gives me great pleasure. I make my own developer from mint, Stinging Nettles or Coffee. I am by no means a purist, though. Subsequently I scan my paper negatives, invert and post process them in Photoshop to get the result I desire. A mix of both worlds. 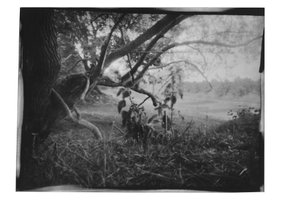 I'm very happy to announce that a collaboration with Oplevelsescenter Vestvolden in Rødovre has resulted in my first solo show of my pinhole photography.

The exhibition takes place at Ejbybunkeren - a bunker which was built during the Cold War, situated in the middle of Vestvolden. This location couldn't be more ideal. The photos are all from the vast area of The West Bank, stretching all the way from Utterslev Mose to Avedøre – all done in 2019-20.

The fortifications bear witness to times, when massive ramparts, supplied with artillery and lined with moats, were considered efficient means to defending the Danish Capital. 20 years later, around the turn of the century, the artillery was technologically outdated. Furthermore, manning the fortifications required virtually all the manpower the infantry could muster. World War 1. finally ended the era of the magnificent European metropolitan fortifications.

These monumental constructions, which are merely a parenthesis in history, are reluctantly being taken back by the surrounding nature. The facilities have long ago played out their role as a fortification, but still shape the landscape and the generel idea of defense – symbolically as well as physically.

Pinhole photography is now considered an alternative photo process. This technique, however, enjoyed its greatest popularity in the 1880s-90s, at the time that the West Bank was being built. 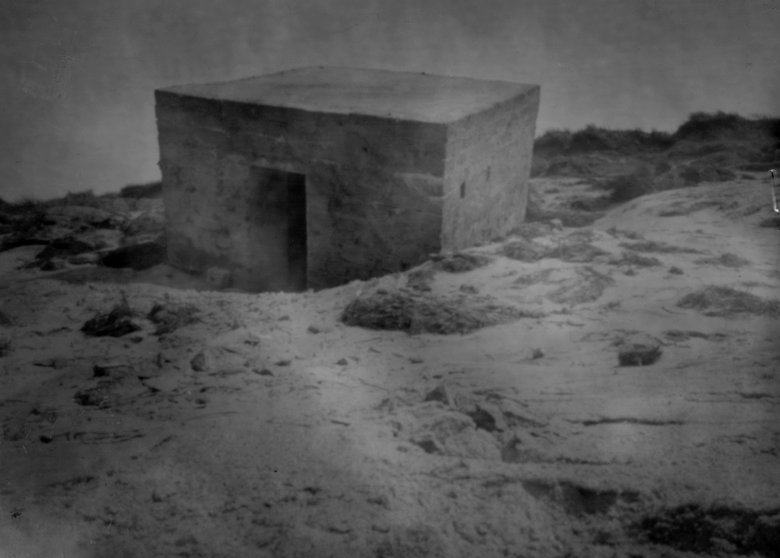 PANORAMIC PARANOIA ON THE EDGE OF JUTLAND

I seem to be developing some kind of relationship with these strange WW2 souvenirs, that, amongst other places, are scattered along the coastline of Jutland. I find the bunkers totally fascinating and beautiful and I will walk many a mile to get a glimpse of what at first glance seems to be stranded whales left to an unhappy ending at the beach. To me the bunkers capture a kind of lonely madness, that somehow gives me an idea about the paranoia, the German empire was absorbed by at this point.

As many as 6.000 bunkers were built along the Danish coastline. A large part of the bunkers are very much still there. 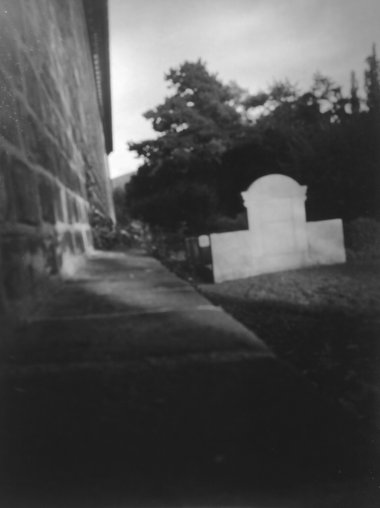 The concept of a cemetery evokes many different feelings, from the evidence of sorrow to peacefulness and horror. There’s a reason many horror movies lend this particular environment as a backdrop to a spooky event. I myself tend to be drawn to these places of eternity. I love the tranquility and sense of somehow being connected to all these souls that are layed to rest in the graves. Spending time at the cemeteries doing my pinholes I have pondered on how people relate to these places nowadays. This has made me curious as to how life unfolds at the cemeteries with contemporary users of these places.

Apart from that, will some of this be possible to capture with the pinhole camera? Somehow the inherent softness and gloominess of pinhole photography suits this location perfectly. I am by no means the first pinhole photographer to explore this environment. I will however give it my shot and dedicate myself to examining this for a while. I will share whatever kind of experience I’ll have with life at the cemeteries along the way.

The bunkers are surrounded by a strong odeur of decay, some of them filled with pools of muddy water and old toads, others heavily tilted in the dunes of sand, most of them overgrown with longhaired vegetation. They seem to be slowly taken back by nature. They’ll probably still be here in a hundred years but already they are becoming something else. Children play in and on them, climbing in and out of every opening, jumping from the tops onto the beach. Families come to visit for a picnic and climbers use them to practice rapelling and climbing.

The bunkers seem to have turned into something quite different from what they were originally intended to be. 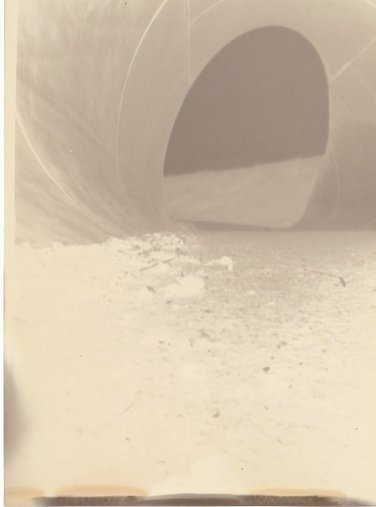 WHY STICK WITH IT?

I love paper negatives. Although people keep telling me to switch to film for more sharpness and quicker exposure, I feel I haven’t quite exhausted the possibilities of the photographic paper. Also, I like that it’s much cheaper than film. I want to be able to explore different ideas without having the media become an obstacle. I would probably consider if the picture was worth doing, using film negatives. The paper gives me an opportunity to do large format within a much more available field. The idea of using inexpensive materials all the way through appeals to me. I can build the camera out of cardboard, pull the pin through some piece of aluminum, most likely from a beer can, and mix all the ingredients for my developing solution myself. If something is not working, I have to figure out what and fix it. It’s really gratifying and is has made me gain a lot more insight into all the photographic procedures. Although I still haven’t completely figured out how aperture and depth of field interacts and what reticulation is. I'm sure I'll get there some day. I'll even get to explore film.

However, for someone like me, who tends to get distracted and move from one thing to the next, doing pinhole photography, I don't feel that urge and I’m actually quite happy with staying in each phase of the ongoing process for a while.